I wrote this a couple of years ago, but never got around to publishing it. Since the newly re-titled Google for Education Innovation Academy is accepting applications again, I felt it might be useful.

Generally, I don't journal. I understand its value, but I find that I never have time to write. For a while there I was doing an audio journal called Hamlet's Head, and I'll record one once in a while since I have two hours in the car to think and reflect (Each way. Don't ask.). The way SoundCloud works, I should be able to separate tech musings from theatre musings from just "uh-musings." 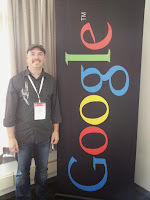 That said, I feel the pressure (mostly self-imposed and however tardy) to write a reflection about my actual Google Teacher Academy experience. If you haven't read about my application experience, it might be worth a couple minutes before you finish this post.

What really prompted this post was a great question by my friend and colleague, +Kristen Morey: "Why is it worth my time?"

So I'm looking back at two of the most intellectually stimulating days of my life through that lens. Here's why it was worth my time.

So the first thing is acceptance into the Academy. We all know that educator recognition is hard to come by, so to be selected to be part of a small, world-wide group of education experts by a cutting edge corporation whose moves in the education space are edgy and impressive feels really good. I don't think I particularly need regular validation (said the actor), but those first few hours after getting the email (thanks again +Alice Keeler for the heads-up on the spam folder) certainly were some of the most bubbly I've enjoyed in a while. I made the joke to my principal that in the edtech world "right now this is a huge deal... in ten years it might not be, but right now it is." According to the folks at CUE and Google, the things that I'm doing are worth recognizing.

When's the last time you had professional development like that?

The craziest part of this whole experience is that it is much like that of putting on a play: you get extremely close extremely fast with a small group of people with a common goal.  On the day you're accepted, you instantly become a member of a new family: your cohort. Before we even got to Chicago, we had created a Google+ Community, Twitter List, YouTube playlist of our application videos, collaborative notes, flash cards of our names and faces, a 4-part blog post introducing our backgrounds, a map of our locations, and a mobile app to collect it all in one place. I don't know about previous cohorts, but this seemed like the beginning of something unique. We were told twice that this was the toughest cohort to get into (the qualifying application score had never been as high), and it became obvious quickly that this group was one we were all humbled and excited to be a part of.

The two days of the actual conference were not mind-blowing in terms of going 0-60 in mere seconds; it was more like going 120 for two straight days. Idea after idea after question after hope after tool after project after giggle after coffee after tour after idea after idea, all you could do was absorb-contribute-absorb. There was no stopping. For three days afterwards I literally had Google Apps for Education dreams. Dreams about improving the lives of others alongside a team of other people who I'm sure were having the same dreams.

You just don't get that in regular PD.

One of the pieces of the Academy process is the Action Plan. Each participant is encouraged to create and implement a project over the following year and submit regular reflections on the experience. Here's mine (it's changed 5 times in the last two weeks, so who knows...). For the first 30 hours or so of the two days, I felt like I had to take everything I was learning from everyone and create something amazing. And then it hit me: each of us had our own areas of expertise and while integrating new tools & ideas would be great, we could focus on what we did best because the other people in the cohort would pick up your slack and produce amazing things in their realm of experience. We don't have to do it all if we're all doing it.

In the eighteen years I've been teaching, I think the collective total of "professional development" days I've participated in have asked me to produce one slide show, two documents, a spaghetti & marshmallow tower, and a handful of notes. Being responsible for product is a rare thing. To be asked to honestly do something as ludicrous and necessary as "change the world..." well that raises the stakes a little.

In the end, I'm now on a mission. I have a responsibility. Sure it's another one. Sure it's pie-in-the-sky. But it makes it SO MUCH EASIER to do the tiny, repetitive, mind-numbing things and to put up with the huge, dark, terrible realities that we all have to deal with in public education.

I'm not sure if it's worth your time, but it was worth mine.
Posted by Seanjay at 12:31 PM No comments: 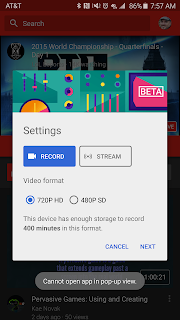 Because you can now easily screencast from any Android device running Android 4.1 and up.

That's right. Screencast from your phone. Or tablet. Without paying or rooting.

How many of you teach your students to set up a binder or notebook a certain way? Use a calendar? Have under-used online resources for students and parents?

That's what I thought.

With YouTube Gaming you can stream or record anything on your device and easily upload to your YouTube Channel. Here's a quick video demo. Let me know what you're teaching with this awesome new tool. I'm off to record a demo of one of my favorite lessons for students: How to Set the Alarm on Your Phone.

Posted by Seanjay at 8:30 AM No comments: